Notice to Proceed this year on HS2 Phase 1 work 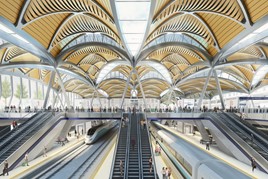 A Notice to Proceed, which is the formal contractual process enabling each Phase 1 supplier to move from design and development to construction, should take place regarding HS2 later this year.

In a House of Lords Written Reply on April 12, Baroness Sugg told Lord Framlingham: “HS2 Ltd has advised the Government that it intends for Notice to Proceed to take place later in 2019, to allow it to finalise costs and plans with its contracted suppliers. Full construction of bridges and tunnels will commence following award of Notice to Proceed.”

Lord Framlingham had asked a question regarding reports of the project costing twice its original estimate, and what steps would be taken to conduct an urgent review of the costs to date.

Sugg reminded him that the HS2 Phase 1 Main Civil Contracts were signed in July 2017 and that Phase 1 development and enabling works are progressing.

She added: “Essential works to prepare the route for this stage are well under way, with over 60 active sites, including major works at Euston, Old Oak Common, Curzon Street and Washwood Heath."