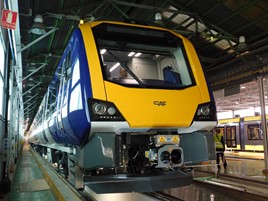 The first complete four-car Class 331 electric multiple unit for Northern has been unveiled in Zaragoza, Spain.

The EMU is undergoing various tests at the CAF factory where it was built, before it is moved to Velim in the Czech Republic for further tests.

The first CAF-built train for Northern is expected in the UK in May, with the first train in traffic from December. That is planned to be Class 195 diesel multiple unit.

Northern’s plan is to introduce the trains initially between the North West and Manchester Airport, and between Chester and Leeds.

A three-car Class 195 DMU is complete at Irun, northern Spain, and that is currently undergoing testing. CAF explained that all EMUs will be built in Zaragoza, with all DMUs built in Irun. Bogies for both fleets will be manufactured in CAF’s Beasain factory, in northern Spain.

CAF is building 98 trains for Northern in a £490 million deal financed by Eversholt Rail. This involves 25 two-car and 30 three-car Class 195 DMUs and 31 three-car and 12 four-car Class 331 EMUs. They will enable the operator to remove Pacers from traffic and internally cascade other fleets.