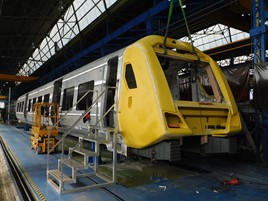 The introduction of 98 new trains for Northern, starting this December, could be just the start of a much larger fleet enhancement.

The first Class 331 electric multiple unit was unveiled by manufacturer CAF in Zaragoza, in northern Spain, on January 31. The four-car EMU is the first to be completed, while a three-car Class 195 diesel multiple unit is undergoing testing at Irun (also in northern Spain). The DMU will enter traffic first, with Blackpool-Manchester Airport and Chester-Leeds the first routes to receive the new trains.

However, Northern believes that withdrawal of the Pacers by the end of next year means attention will then turn to the quality of the remaining trains. There is concern that Class 150, ‘155’ and ‘156’ DMUs dating from 1985 onwards will still be in traffic into the next decade, and the operator believes the standards set by the new ‘195’ and ‘331’ fleets will generate an evaluation of what is on offer.

The new trains are designed to create more capacity, and to attract more passengers onto rail. Northern’s Customer and People Experience Director Richard Allan said: “These new trains mean capacity will be created into cities like Manchester. Does that then mean further investment is needed, and when?”