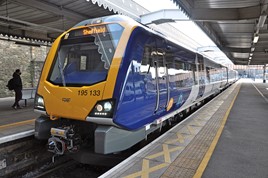 The 100th new CAF train for Northern made its passenger debut on December 9, and the operator is already looking at increasing the size of its new-build fleet.

Three-car diesel multiple unit 195133 operated six round trips between Manchester Piccadilly and Sheffield via the Hope Valley, with its first train the 0546 eastbound.

A £500 million deal for 98 trains, later increased to 101, was placed with the Spanish train builder after Arriva took over the Northern franchise in April 2016. This was the largest European order for the manufacturer at the time. Eversholt Rail funded the trains.

While all the 43 Class 331 electric multiple units were built in CAF’s Zaragoza factory in north-east Spain, the 58 Class 195 DMUs were built in Irun (northern Spain) and Newport (Wales).

Williams revealed: “We have been looking at new trains - more Class 331s.

“Ideally, what we are looking for is standardisation. I don’t want lots of different train types. The lack of standardisation surprised me - there are different couplings, door controls, vehicle lengths. This makes it hard for crewing and rostering, but also about how you manage the trains for passengers.”

There is no timescale for the new trains. A CAF source confirmed that a lot of work was ongoing with Northern, including the continued development of a battery EMU that is planned to be tested on the Oxenholme-Windermere route.