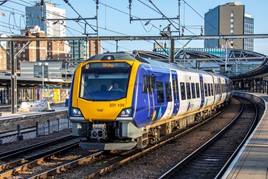 All of Northern’s Class 331 electric multiple units are now in traffic except for two three-car trains.

Built by CAF in Zaragoza, 31 three-car Class 331/0 and 12 four-car ‘331/1’ EMUs were ordered as part of a £500 million, 101-train order. At the time it was CAF’s largest ever European-based contract, placed by Arriva after it took over the Northern franchise.

Meanwhile, two Class 195 diesel multiple units from the same order have yet to arrive from Newport, where CAF is finishing their assembly ahead of testing and commissioning at Edge Hill.

The DMUs (195132/133) will complete the 101-train deal, although 195021 is also at the South Wales site undergoing repairs, having been damaged when it derailed while shunting at Edge Hill earlier this year.