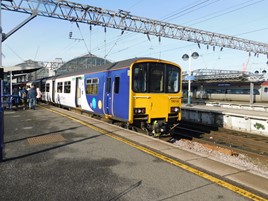 Northern has written to conciliation service ACAS requesting it to use its powers to establish an independent inquiry into the issues at the heart of the RMT’s ongoing dispute with the operator.

The union immediately hit back, calling it a “PR stunt”.

Northern said the inquiry would look at the future role of the second person that will be on its trains. It would also explore the feasibility of Driver Controlled Operation (DCO), the operator said.

According to a statement released by Northern on December 19 ahead of the 41st day of industrial action on December 22, the operator wants the inquiry to get the RMT involved in discussions to resolve the dispute. Northern said the inquiry would have an independent chairman and panel members while contributions would be invited from any interested parties.

Northern Deputy Managing Director Richard Allan said: “The RMT dispute means customers, businesses and the wider economy in the North have suffered the cost of 40 days of RMT strikes, including every Saturday in September, October, November and now December. Customers, employers and colleagues are looking for both parties to resolve the dispute.”

Allan said more than 50% of all rail journeys in the UK are made on DCO trains and that recently the government and Transport for the North publicly confirmed a second person would be retained on Northern services.

“This second person will provide customer service, including meeting customer needs on accessibility, safety, security, ticketing and information. Despite this, the RMT continues with its strike action,” he said.

“We call on the RMT to join us in committing to the inquiry and suspending its industrial action whilst the inquiry takes place. This would demonstrate commitment from both sides to try and resolve the issues, reassuring customers and stakeholders that every endeavour is being made by both sides.”

He added that Northern has promised conductors that their future role will be on-board trains and that is guaranteed until at least 2025, while their pay will be protected (starting at £28,250 per annum) with an annual review, if the union ends its dispute.

ACAS has legal powers to carry out inquiries into industrial relations matters and to publish findings. These can be in general, on a specific industrial sector or on a particular organisation.

RMT General Secretary Mick Cash said on December 19: “The call for an inquiry is nothing more than a PR stunt and we have not seen any proposals from Northern whatsoever that would make serious progress in terms of resolving the dispute.”

He accused the operator of “seeking to kick the issue of rail safety into the long grass indefinitely” rather than facing up to the issue of the guard guarantee on its trains. “There is no way that RMT will allow them to get away with this chicanery,” he said.

Cash added: “The answer to resolving this dispute is not an inquiry but meaningful negotiations. We don’t need an inquiry, we need genuine and meaningful ACAS talks focused on retaining a guard on Northern trains with the full suite of safety and operational competencies including at the crucial platform/train interface. RMT stands ready for talks but we will not allow the company to railroad the issues at the heart of the dispute with meaningless gestures designed to buy time and delay a solution.

“The RMT action remains on.”