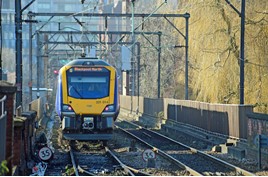 A Thameslink-level service is needed through the Castlefield Corridor, says Transport for the North.

In a joint statement released on February 28, leaders from across northern England cited the transfer of Northern from Arriva to the Government’s Operator of Last Resort as the time to commit to improving one of the region’s top rail congestion spots.

The broad cost for the scheme is thought to be between £700 million and £800m. It would support a network that carried 21 million passengers in 2004… and 50 million last year.

Leaders now claim that the OLR will struggle to deliver promised service enhancements unless work to improve capacity on the corridor is given full priority. They say the £7 billion Thameslink project shows what can be achieved and that the Castlefield Corridor faces comparable issues.

In statutory advice issued to Secretary of State for Transport Grant Shapps, TfN has called for the approval of a Transport and Works Act Order (TWAO), to begin a major package of work without delay and which includes authorising the start of detailed design work and instructing Network Rail to identify costs for improvements works at Manchester Piccadilly and Oxford Road stations.

It also wants support for projects to be taken forward, including: building new sidings for local trains to the east of Manchester Victoria (something Northern had been calling for); creating more platform capacity at Manchester Airport; and developing track ‘fly-overs’ near the Ordsall Chord to enable trains to cross paths.

TfN also says there needs to be an urgent assessment of Piccadilly-Slade Lane/Stockport, to look at the benefits of (and optimum location for) grade-separation as well as assessing the value of six tracks between Longsight and Slade Lane.