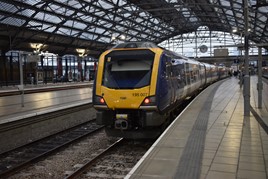 That is the message from Transport for the North Chief Executive Barry White, who declared: “The North has - rightly - been a key battle ground in this election, with pledges made on improving our transport and creating opportunities. Now is the time to advance that Northern agenda in the national interest. The Prime Minister must now deliver.”

White added that TfN has been “encouraged” by promises to fully commit to Northern Powerhouse Rail. When Johnson replaced Theresa May as Prime Minister in July, he made the pledge that NPR would be built between Leeds and Manchester (RAIL 885).

“There are big decisions ahead that will change the fabric of the North - not least how our railways are run and delivery of HS2,” said White.

“We stand ready, on behalf of the North, to work with Boris Johnson and the new Government to ensure the much-needed investment is delivered to help rebalance the UK economy.”