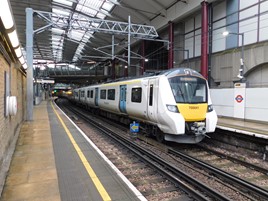 Eight operators, including Govia Thameslink Railway (GTR) and Northern, will continue with the planned May timetable change, rather than change in December.

This follows a review by the incoming Network Rail (NR) chief executive Andrew Haines, who was commissioned by Secretary of State for Transport Chris Grayling and NR Chairman Sir Peter Hendy to review the industry’s plans for the new winter timetable due to be introduced on December 9.

The decision follows the chaotic introduction of the May 2018 timetable which has caused hundreds of cancellations on GTR and Northern. Neither is yet running the planned service that was due to start from May 20.

Haines consulted with NR and operators. The government accepted the recommendations, which involves some operators introducing planned changes while others will continue with May 2018’s timetable in place until May 2019.

He recommended that, where possible, planners should try and make small adjustments to the May timetable planned for Northern and GTR regarding passenger and stakeholder feedback to improve service patterns and frequencies.

Freight operators are discussing the decision with NR and how it affects them.

Hendy said: “The railway industry has taken a long hard look at its plans for the next timetable change in December and, taking into account recent painful lessons, the industry has scaled back its ambition and tempered it with a more cautious, phased approach to introducing the new timetable.

"While there will still be new services introduced this December, other new services will now be introduced more gradually over the next few timetable changes to help smooth their introduction and maintain a reliable service for passengers and businesses alike.”

Paul Plummer, Rail Delivery Group chief executive said:  “In parts of the country, many people have suffered unacceptable disruption following the introduction of the new timetable in May for which we are sincerely sorry. Working together, the industry is determined to learn the lessons from what went wrong.”