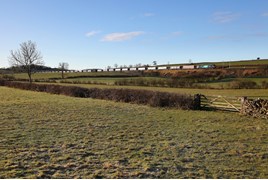 The author of the National Infrastructure Commission’s forthcoming reports into the future of freight has moved to reassure rail freight chiefs that the independent Government body has an “open mind” on the future of transporting cargo.

In the week that Government announced the NIC is to look into the future of hauling freight, NIC Chairman Andrew Adonis faced mass criticism from rail freight operators after claiming on Twitter that late-running freight trains were the cause of delays to his journeys, and suggesting that freight paths should be surrendered in favour of passenger services (RAIL 841).

NIC Commissioner Bridget Rosewell, who is to lead the study, told RAIL: “Andrew is the chairman of the commission, but he is only one of the commissioners - there’s a whole set of pieces of work which will be investigated. Clearly looking at platooning is important. Will it have a big impact? I don’t know.”

She added: “This is new stuff. We know about rail freight, we don’t know how those technologies may have an impact, and it is really important that we should. What the conclusion will be, I do not know. Andrew said he wants to get a debate going about this, which I think is completely right.