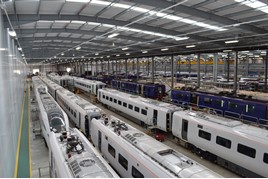 The north east of England is “again becoming synonymous with the best trains in the world”, declared Sedgefield MP Paul Howell as he marked the fifth anniversary of the official opening of Hitachi’s Newton Aycliffe factory.

The anniversary (September 3) was on the same day that the final Intercity Express Programme train was handed over to LNER.

Since the site’s opening, 192 trains have been delivered to Great Western Railway, LNER and ScotRail. The initial £82 million investment in the site has risen to more than £110m, and a new facility to weld and paint vehicles is being built. This will improve the site’s capability, with an ambition to export trains around the world.

Howell said: “Hitachi Rail has put train building back on the map in the North East. With such a rich railway heritage in the region, including the very first passenger railway, the North East is again becoming synonymous with the best trains in the world.”