New trains must be built in the UK, urges Unite 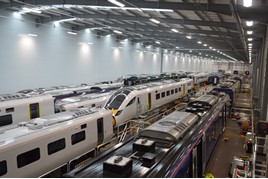 The Unite union has urged Government to bring forward new train-building contracts and make sure they are awarded to companies manufacturing in the UK.

The call was made on January 30, after it signed a deal for Hitachi to recognise the union at its Newton Aycliffe facility (covering 730 jobs).

The union has written to Secretary of State for Transport Chis Grayling, warning that the lack of future orders “puts long-term investment, jobs and skills at risk along with our capacity to build desperately needed rolling stock here in the UK in the future”.

Unite Assistant General Secretary Steve Turner wrote: “In addition to hundreds of high-value, high-quality jobs created in the North East, Hitachi has invested over £100 million in its UK factory, and has spent over £628m with over 1,168 suppliers across the country. The company has also created a long-term skills legacy through investment in the nearby South Durham University Technical College. However, without a commitment to supporting UK manufacturing from government, these are under threat, too.
“Given the above, I am today calling on the Government to support the long-term investment commitments of UK-based manufacturers. With government investment in rolling stock and rail network development already long overdue, particularly across our northern networks, there is the potential for long-term stability in the sector securing jobs and skills alongside apprenticeships at all UK factories.”

As it stands, the County Durham site has contracts to assemble Class 385 electric multiple units for ScotRail, and Class 800 bi-mode and Class 801 EMUs for LNER. All but the final ‘801s’ will finish this year, with no further confirmed contracts.