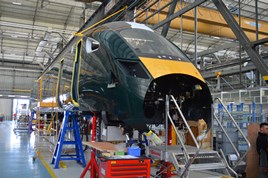 Testing of the first Great Western Railway Class 802 bi-mode train to be built at Pistoia by Hitachi Rail Italy begins in September. It will arrive in the UK in December, and enters traffic next year.

They will enable the replacement of the High Speed Trains on the route from the first week of March 2019.