New trains for Scotland being tested in Germany 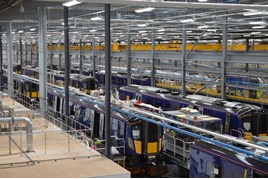 Testing of Hitachi Rail Europe Class 385s has moved to Germany, ahead of the trains entering service in December.

Two electric multiple units have moved from the Velim test track in the Czech Republic to Minden (near Hanover), where they will be tested on a range of different routes at speeds up to 100mph. They will be based there until October. The EMUs involved are three-car 385002 and four-car 385101.

HRE says the testing is being carried out in Germany to speed up the process, owing to the busy nature of the UK rail network. The work in Germany is in addition to that being conducted by 385001 and 385102 in Scotland.