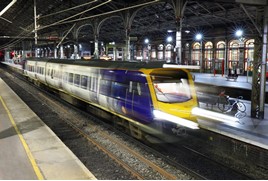 CAF Class 195 diesel multiple units will be introduced onto Chester-Leeds Northern Connect routes from October 21, during the next round of new train introductions on the franchise.

Already more than 20 of the CAF Class 195s and ‘331s’ have entered traffic with Northern, allowing the first tranche of Class 142s to be sent for warm storage, along with electric multiple unit 322481.

Meanwhile, the latest deliveries at Edge Hill depot have been 195009/012, 331015-331018. They have arrived for testing and commissioning ahead of their entry into traffic.