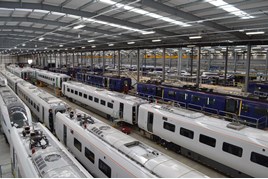 Over the Christmas period, the national media was keen to highlight research showing that the UK’s train fleet in 2015-16 was the oldest in many years, with an average age of 21.0 years. It was less inclined to point out that this will soon drop to 16.0 years.

Prior to June 8’s General Election, 5,665 vehicles were either on order or formed part of ongoing orders. And the majority of these new trains are not necessarily designed to replace existing trains entirely, but rather to boost capacity for certain train operating companies (TOCs) and to release vehicles for use elsewhere. On June 20, First MTR confirmed a deal for 750 vehicles for its new franchise.

Not every replaced vehicle will have a new home, but it would be incorrect to suggest that all the new orders are merely like-for-like replacements.

Clichéd comments about new trains being predominantly for the South were made by Ed Cox, Director IPPR North. Yet TransPennine Express currently operates the youngest UK train fleet, and it is set to take delivery of three brand new train fleets - replacing all of its Class 350/4 electric multiple units (EMUs) and most of the Class 185 diesel multiple units (DMUs). Northern has 281 new vehicles on order, while Virgin Trains East Coast (VTEC) will be serving the North with its Class 800/801 Intercity Express Programme trains.

Some of the new trains form part of relatively small orders, some were ordered speculatively before finding homes, while others form part of an entire TOC fleet replacement plan.

Billions of pounds are being spent on the new kit by various organisations, with more expected to follow as more franchises are let, usually with new trains. And money is cheap at the moment, which means new vehicles are financially more viable than perhaps they would have been in a different financial climate.

One such example is Great Western Railway’s AT300 Class 802 bi-mode order. Funded by Eversholt Rail Group, 36 trains (14 nine-car and 22 five-car) are currently being constructed and delivered to the UK (RAIL 828, 829).

They are intended to replace GWR’s High Speed Trains (HSTs), the oldest of which are now more than 40 years old. However, that had not always been the plan - indeed, GWR did consider refurbishing the HSTs to take them past their half-century anniversary.

In the end, such a move proved to be not commercially viable when the cost of converting HST vehicles to meet disability access regulations required for use beyond January 1 2020, combined with the likely required refurbishments and overhauls, was compared with the cost of new trains.

Put simply, the HST would last probably around a further ten years, whereas the AT300s will have a likely lifespan of at least 30 years. Thus, the value was in the new £500 million fleet.

As well as the 6,415 vehicles either on order or being delivered as part of ongoing orders, a further 17 four-car EMUs are due to be ordered for c2c as part of the Essex Thameside franchise. Meanwhile, the new South Western franchise won by FirstGroup includes a planned 750 vehicles for inner-suburban routes.

Many deals in place also have options for more trains if required, so the figures could yet change. And with the continued rise in passenger numbers, you would not bet against some orders being extended.

All of the trains currently on order will be in traffic by the end of 2020, as the industry looks to accommodate not only the 1.7 billion passengers that it moves annually, but also the expected further growth in passenger numbers.

Some fleets have already started to enter traffic, such as GWR’s Class 387/1s and Govia Thameslink Railway’s Class 700s, as the deals placed earlier start to bear fruit.

From September, Hitachi Rail Europe will start delivering Class 385s into traffic for ScotRail. These will initially operate on the Edinburgh-Glasgow via Falkirk High route (provided the overhead line electrification programme is completed on time), before spreading to other routes.

In October, the first Intercity Express Programme Class 800/0s will enter traffic with GWR, as the industry finally witnesses the start of the HST replacement. Crossrail’s Class 345 Aventra EMUs are also due to enter traffic imminently, as will South West Trains’ Class 707s, although no date has been confirmed for either the ‘345s’ or the ‘707s’.

Next year, full rollout of the ‘700s’ as part of the £6 billion Thameslink project will take place, with 115 of the trains in traffic as GTR operates the planned 24 trains per hour through the ‘Core’ between St Pancras International and Blackfriars. The ‘700s’ will also be introduced onto GTR’s Great Northern routes.

Meanwhile, GWR will extend its Class 387/1 operation to Didcot Parkway, as Network Rail switches on the OLE west of Maidenhead. This will trigger a cascade of DMUs further west.

And IEP trains will start operating on the East Coast Main Line for VTEC. June is the rumoured start date, although this has yet to be confirmed.

There are also huge variations in the types of deals. Two freight operating companies have ordered locomotives, including one that could revolutionise the freight sector. And a third freight operator is also talking to manufacturers regarding new diesel designs, as it looks to keep pace with ever-changing technology.

Meanwhile, orders have been placed for two train designs that were thought to be obsolete (certainly in terms of new orders for the UK), with locomotive-hauled coaching stock (LHCS) and diesel multiple units both to be delivered for TOCs.

And there could be the prospect of more LHCS for new franchises, depending on who the victorious bidders are.

Certainly, any suggestion after the May 1988 timetable change that new locomotives hauling new coaches would be an option for companies in 2017-18 would have been seen as fanciful, as two-car DMUs replaced LHCS formed of five, six or more coaches. But the demand created by the railway has led to these decisions being made.

As for the trains themselves, the days of the orders being a straight fight between Bombardier and Siemens are over. Hitachi Rail Europe broke into the UK market back in 2006 with the Class 395 order, and this was followed by the IEP order in 2012.

Other new entrants to the UK market are Stadler, which has won major deals with Greater Anglia and Merseytravel, and Construcciones Y Auxiliar de Ferrocarriles (CAF), which won significant orders last year due (in part) to its ability to deliver new trains quickly.

For this reason, CAF is building DMUs for Northern. The same overall order also included EMUs for the operator, in what is CAF’s biggest order for the European market. The Basque-based manufacturer is also building Mk 5 coaches for Caledonian Sleeper and TransPennine Express, as well as Class 397 EMUs for TPE.

Electric multiple units account for the majority of the new trains, with 5,047 vehicles ordered or delivered (78.6%). But there is an increase in the number of bi-mode trains, such as the Intercity Express Programme or AT300 fleets, while the bi-mode multiple unit (BMU) market is also increasing.

All told, there are 1,030 bi-mode vehicles on order, totalling 16% of all current orders. And more could follow, with Bombardier confirming that it is interested in the market.

Industry speculation suggests this could be one option explored for the East Midlands franchise’s new train fleet, with continued uncertainty regarding the erection of overhead line equipment beyond Corby on the Midland Main Line. The Canadian company, which has its UK headquarters in Derby, has also confirmed it would build DMUs again - if the market so desired.

Bombardier’s decision was confirmed before Network Rail Chief Executive Mark Carne told the industry that Control Period 6 (April 1 2019-March 31 2024) was unlikely to include a host of major new projects, such as electrification.

Carne has also spoken openly about possible ‘infill projects’ (RAIL 825), and how BMUs or even battery-powered trains could be used to create new duties on routes where otherwise DMUs would need to soldier on, while OLE schemes were ‘paused’, ‘deferred’, cancelled or simply never planned in the first place.

In the longer term, Alstom has unveiled its Hydrogen-powered Multiple Unit (HMU). This could be made available for the UK, but not for a few years, although the company does intend to offer it to franchise bidders in the future. Alstom has also launched a new EMU for the UK market, and has put it forward for recent franchises, although it has yet to win an order.

This year heralds the start of the IEP operations, but there are many more fleets being built and delivered across the UK. Britain’s UK train fleets are changing, and getting younger.

This feature was published in RAIL 830