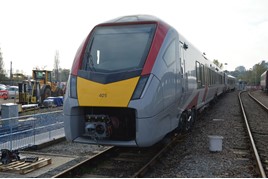 The first of Greater Anglia’s 169 new trains arrived at Norwich Crown Point on November 15, with a second following on November 29. More are due this week.

GA has 58 trains on order from Stadler (38 BMUs and 20 electric multiple units), and 111 on order from Bombardier (89 five-car and 22 ten-car Class 720 EMUs). Both fleets start entering service next year.

The ‘755s’ will now undergo commissioning before beginning testing on the Great Eastern Main Line from mid-December. They are due to enter traffic around the start of the new May timetable.

“It’s so exciting to see one of our new trains here in East Anglia. I’m sure people will be impressed when they see it - it is very different to our existing trains,” said GA Franchising and Programmes Director Ian McConnell.

“Over the next few weeks we’ll be taking delivery of more of these trains, so customers will see them around and about our stations.

Five of the trains will be delivered to the UK before the end of the year, although RAIL understands that not all will necessarily be delivered to Norwich, with other locations being assessed for possible short-term storage and testing ahead of their introduction. Crown Point is currently being redeveloped ready for the new trains - the main maintenance shed is being extended, and new sidings are being installed in the Wensum Triangle between the main running lines and the existing sidings.