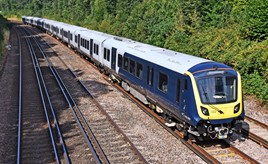 The first of South Western Railway’s fleet of 90 Class 701 trains will not enter service in December as planned.

SWR sources have confirmed the first passenger train will not run until the New Year.

The reasons are a combination of continuing technical glitches, and the challenge of training sufficient drivers and guards during the pandemic.

The train operator took delivery of its first set from Bombardier in June. It was tested initially from Eastleigh before moving to Wimbledon, where the fleet will be maintained.

In August an event was held at the south London depot to announce the fleet name of “Arterio,” when entry into service on the Reading to Waterloo line was promised “by December.”

Like all previous variants of the Aventra model on Crossrail, London Overground and Greater Anglia, there have been software issues.

Bombardier engineering director Christian Roth had previously admitted: “The biggest cause of delay was the software development. These trains are very complex – they have a lot of new features, with the integration of new signalling technology as well.”

750 carriages are on order, worth almost £1 billion. Delivery is expected to continue throughout 2021. A new stabling facility at Feltham is nearing completion.

No revised start date for the trains has been given.