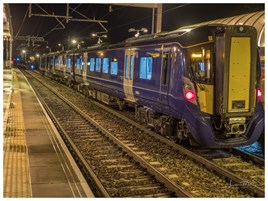 Electrification of the Edinburgh-Glasgow via Falkirk High route took a major step forward on October 18, when a Class 385 ran under its own power between Edinburgh Waverley and Linlithgow.

Three-car electric multiple unit (385001) was used during tests as the ScotRail Alliance prepares for full testing of its new trains on the electrified route.

SR said: “When the final safety checks on the infrastructure along the remainder of the route are complete, full testing of the new trains will begin.

ScotRail Alliance Programmes and Transformation Director Ian McConnell, said: “Yesterday’s trial was a hugely important step towards completing the electrification of the line between Edinburgh and Glasgow. Having a train run on the route is one of the final phases of the electrification process. That it has gone so well tells us that we are almost ready to begin the next stage – which is to start fully testing the new trains themselves.

Hitachi Rail Europe Programme Manager Andy Radford, said: “It’s positive so see that progress is being made on Edinburgh to Glasgow electrification.

“We’re hopeful that we’ll be given permission to start full testing soon so we can guarantee the trains can run for passengers safely. We’ve now got trains at our factory in Newton Aycliffe ready to travel to Scotland as soon as they can run on new electric power line.”

When the trains are introduced, the Class 385s will run initially on the Edinburgh-Glasgow via Falkirk High route, followed by Edinburgh-North Berwick and South Glasgow suburban routes including Cathcart Circle, Neilston, Lanark. They will also operate Glasgow/Edinburgh-Dunblane/Stirling/Alloa, Glasgow-Falkirk Grahamston via Cumbernauld and Glasgow Central-Edinburgh via Shotts.

Initially seven-car formations will be used on EGIP, but when eight-cars are introduced, capacity will improve by up to 44% at peak times (compared to a current six-car trains being used).