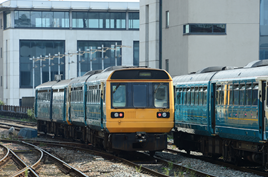 Using modern rolling stock and replacing some of the oldest trains in the UK forms part of the Welsh Affairs Committee’s suggestions to tackle “long-term underdevelopment in the Welsh rail network”.

The findings are ahead of the Welsh Government being given power to decide the operators of the next Wales and Borders rail franchise, which begins next year.

Passenger numbers have risen by approximately 75% in a franchise that the committee says was let in a 15-year deal with no allowance for growth or provision for extra train capacity.

The Committee said: “Over the years, effort and investment by Arriva Trains Wales and the Welsh Government have sought to cope with the increase in demand. However, this has been at a higher cost than anticipated, and wider improvements to the system have been far less than could be expected.”

It added: “The Welsh Government view the next franchise as presenting the opportunity to bring about transformational change. However, this will only be possible if a number of infrastructural improvements are made - principally, electrification of the network.”

It said there was an urgent need to acquire more trains, with modern facilities. It claimed the average age of the trains was 27 years, with the oldest 40 years old. The Committee suggested tagging onto existing train orders, or that Wales be given first refusal for trains made available through cascades.

For more on this story see RAIL 819, published on February 1.​