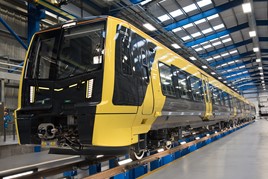 Speaking at the official launch of the first four-car electric multiple unit at Kirkdale depot on January 28, Rotheram said: “I’m delighted to welcome the first of our new trains - owned by us the public - to the Liverpool City Region. These trains are the most accessible anywhere in the country and they will help make our rail network fit for the 21st century.”

The Stadler EMU had been delivered to Merseyside earlier in the month (RAIL 897) and will begin dynamic testing on the Mersey network in the coming weeks.