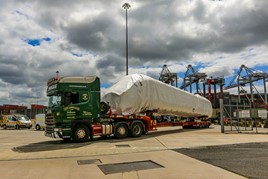 Avanti West Coast’s £350 million, 125mph Hitachi fleet will feature vehicles built at Newton Aycliffe, rather than assembled as has been the case with other fleets at the facility.

This was confirmed on July 3, days after the first nine bodyshells for AWC’s new fleet arrived at Southampton Docks.

Hitachi is delivering 13 five-car Class 805 bi-modes and ten seven-car Class 807 electric multiple units. These were ordered last December (RAIL 894) and are due to enter traffic from 2022.

In all previous Hitachi orders at Newton Aycliffe, the vehicles were assembled in Kasado (Japan) and shipped to the UK. Other fleets, including Great Western Railway Class 802s, several TransPennine Express ‘802s’ and Hull Trains ‘802s’, were built entirely at Pistoia (Italy).

However, following an £8.5 million upgrade at the County Durham site, with the installation of friction stir welding capabilities (as at Kasado and Pistoia), Hitachi will build 56 of the 135 vehicles at Newton Aycliffe. These are expected to be the final eight Class 807s on order (807003-807010).

The first nine bodyshells to arrive will be the five for 805001 and four from 805002. These will already undergo more assembly in the UK than previous orders (other than the First East Coast Open Access fleet), having arrived as empty shells.