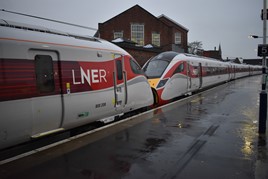 A solution regarding the inter-car connector design that delayed the introduction of the LNER Azuma fleet has been agreed by the Office of Rail and Road.

It involves reducing the number of cables between vehicles, increasing the dis-tance between the cables and fitting clear warning signage similar to that found at a sub-station regarding the risk of electrocution.

More than 30 designs were considered after the ORR deemed the current ‘ladder’-style design unsafe (RAIL 863). This followed an accident at Manchester Piccadilly in 2017 when a drunk passenger climbed a similar design between Class 390 vehicles and was electrocuted. An inquest was told he was killed instantly.

When the ORR made its decision in October 2018, it said it was about mitigation, and that the aim was to prevent similar accidents happening. This was despite Great Western Railway Class 800 and ‘802s’ already operating with the design.

A Hitachi spokesman said: “We will be working with our customers who operate the Class 80x series to make appropriate modifications to carriage interconnectors, with all changes enacted by the revised deadline of Summer 2022, as agreed with the Office of Rail Regulation.”