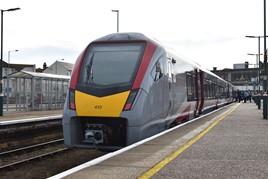 Its first train was the 0747 Lowestoft-Norwich, replacing Class 37-hauled stock. The ‘755s’ will progressively take over more duties ahead of the transfer of existing GA trains, with the 12 Class 170/2s due to move to Transport for Wales from October.

GA also has 89 five-car and 22 ten-car Class 720s on order from Bombardier, with testing underway on the first set.