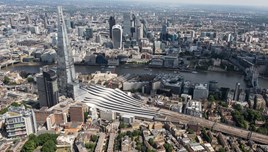 Network Rail is warning passengers to plan their journeys carefully ahead of the August Bank Holiday weekend of August 26/27.

The company says the £133 million being spent on maintenance and upgrades over the weekend is “unprecedented”. Many London stations including Blackfriars, Cannon Street, Charing Cross, Euston, Liverpool Street, London Bridge, Paddington and Waterloo will have reduced services, and trains running from unaffected termini are expected to be much busier.