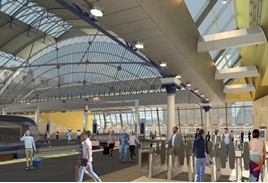 They show the results of the £120 million redevelopment which is due to be completed by spring 2020.

NR is extending Platforms 2 to 5 to accommodate eight-car electric trains. These are being lengthened towards George Square, taking up the majority of the space covered by the Victorian train shed roof. A new glass-fronted concourse, almost double the size of the existing space, is being built to accommodate the predicted increase in passenger numbers at what is Scotland’s third largest station.

The fully accessible concourse will have three entrances and will be filled with natural daylight as the listed Victorian train shed roof will be fully exposed when viewed from platforms.

Externally, the train shed roof will be partially visible looking south along Queen Street and from the Cathedral Street side of the building.

NR contractors have removed the 1970s Millennium Hotel extension that previously hid the station. The eight-story Consort House tower and connecting annex have been significantly deconstructed.

NR said 75% of the demolition work has been completed. Work will soon begin on strengthening foundations for the new structure.