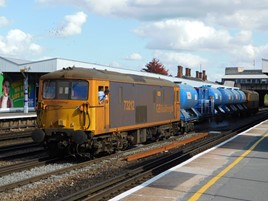 More than 60 trains will be used by Network Rail in its fight against the autumn weather. NR has also confirmed they will run earlier than usual, with the first of them starting work today (October 1).

The company has 32 multi-purpose vehicles (MPVs) and 29 railhead treatment trains (RHTT) across the country. It is expected that they will run until December 13.

Speaking at GB Railfreight’s Tonbridge Yard on September 28, Rob Davis, NR route delivery director told RAIL that 2% of the expected leaf fall had already happened. “We’ve been treating for more than a decade, so we have experience of knowing when to treat the railway,” he said. Davis said NR speaks with The Met Office twice a day regarding weather forecasts.

The MPVs and RHTTs are used to combat leaves on the line. When they fall, they create a thin, black layer on the track, similar to black ice on the roads. This affects the train’s braking and accelerating, which in turn affects journey times.

Davis explained that a build-up of leaf mulch can also make it harder for signallers to detect a train’s location, which then disrupts other services. This is because the mulch can electrically insulate the train’s wheels from the rails.

The MPVs and RHTTs operate across the network spraying water at a pressure of 1500bar. MPVs are used where locomotives cannot operate due to their better route availability and flexibility.