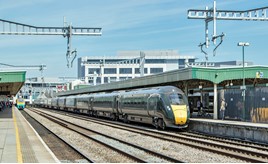 The overspend was due to declining efficiency, higher compensation payments to train companies, and overspend on enhancement projects - although the infrastructure manager remained within its overall funding envelope.

The findings are among the conclusions in the Office of Rail and Road’s (ORR’s) last Network Rail Monitor for the Control Period, which was published on July 18.

Network Rail Monitor also analyses the eight geographic routes. It found that Wales was the top performer, achieving 69.2% of the available score on the scorecards, followed by Scotland (60.7%) and Anglia (58.6%). Wessex scored lowest (48.9%).

The publication says that NR’s health and safety plans achieved “real reductions” in risks over CP5, but points out that passenger train performance suffered throughout.

Failings in NR’s underlying performance management capability became evident, and a Provisional Order was made by the regulator in November 2018, after which it says NR responded positively.

NR’s System Operator function is said to have significantly increased its train planning resources and sought to improve timetable technology, while NR’s freight performance was described as strong.

Performance of NR’s assets improved in CP5 compared with the previous five-year period, with the number of asset-related incidents decreasing.

However, there was an increase in the final year of CP5, and data shows there has been a steady rise in the amount of delay caused per incident.