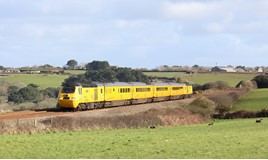 Network Rail’s plans for Control Period 6 (CP6) include a 25% increase in funding to reduce delays and improve infrastructure reliability.

The Strategic Business Plan (SBP) was published today and outlines how NR intends to spend a record amount of up to £47 billion.

The SBP represents NR’s initial yet detailed view following the publication by of the English and Welsh Government’s High Level Output Specification (HLOS) and Statements of Funds Available (SoFA). The Office of Rail and Road (ORR) will now review the plan, with a draft determination of NR’s funding requirements due in June and a final determination in the autumn.

Carne said: “Passengers’ journeys will be transformed in the next few years as thousands of new trains enter service. By 2021 there will be almost 350,000 more services per year than today – an average of an extra 1,000 services a day, better connecting communities and driving economic growth across the country.

“This plan builds on these improvements and sets out how we will make the railway more reliable and cost efficient and how we accelerate the technological transformation of our railway into the digital age.

“We will continue our strategy to work more closely with train and freight operators, working together in partnership to continue to expand the network for the millions more who will want and need it in the years ahead.

“It is an ambitious but realistic plan that is not without challenge, but with great people working together in great teams, it can deliver the better railway that a better Britain needs.”

The SBP includes detailed route-by-route plans covering expenditure, which overall includes £18.5bn on operations and maintenance, £18.5bn on renewals and £10.1bn on enhancements. Should further enhancements be needed then NR must make a business case for the Treasury.

Overall, the SBP outlines how NR intends to deliver a 15% reduction in the number of delayed trains and a significant uplift of expenditure (25%) earmarked for day-to-day improvements recognising the huge increase in the number of services and the extra wear and tear expected on the railway’s infrastructure as a result.

NR said the era of major ‘conventional’ resignalling will begin to be phased out as this plan ushers in the start of the railway’s digital age with digital train control that will enable even more services to run, more safely and at lower cost.

The SBP also outlines investment in further projects to increase capacity on the network, but more will be developed on a case-by-case basis and once they are mature enough, be put before funders for a decision. Other projects may require additional funding and plans are being developed to identify new sources of funding that do not rely on taxpayers, said NR.

The infrastructure company also wants to reduce the risk of a train accident by a further 10% through better inspection techniques and better asset management, as well as making further significant strides in workforce safety.

NR also reveals what it calls “ambitious targets for the environment, for a better gender balance, and for the health and wellbeing of our workforce” including:

Carne said: “Britain’s railways have seen a revival over the past decade or so and we have been working flat-out over the last five years to build new stations and new infrastructure to enable thousands of more services to come on stream to soak up that demand. For the next five years we need to relentlessly focus on making our railway more reliable while also ushering in new digital technology that with help to transform our railway in the years ahead.”