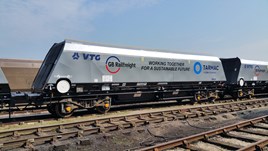 The decline of coal was seen as an opportunity by VTG Rail UK which began to plan strategically for the changing face of the rail freight sector in the UK.

The rapid growth in domestic intermodal and aggregates traffic was particularly noted.

The main focus was the conversion of 24 HYAB ‘Vulcan’ coal wagons that were otherwise redundant for use in the aggregates market. These were bought from Porterbrook, with an engineering plan commissioned to enable the vehicles to be handle the denser payload of stone traffic. This was achieved through shortening the wagons to maintain the existing axle loads. This was around 40% cheaper than new build wagons, and was key to GB Railfreight being able to mobilise new flows for Tarmac from Cumbrian quarries. Since the wagons were fitted with track-friendly bogies and manufactured with semi-stainless bodies it made sense to repurpose the vehicles. That steel ensures the wagons have a longer ‘second career’ as there will not be corrosion problems that affect mild steel wagons.

Initially one rake of 24 wagons was commissioned, but this has been increased to three rakes.

The wagons were shortened by removing the central section of the body (including one discharge door).

Using the shortened vehicles, the same train length was able to carry around 30% more payload of material than previously possible if they had retained their original configuration. As coal wagons, they were 18.3m long and carried a maximum payload of 75 tonnes. Following repurposing, they are 14.9m long but carry 78t payloads. It means a typical 375m long train carried 1,500t payload, with 20 wagons, but now a 375m-long train can be formed of 25 wagons carrying a total 1,950t payload. Over five trains per week that equals an extra 2,250t payload.

The other vehicle VTG repurposed was a rake of Megafret low-deck container flats that were shortened by five metres, thus equipping them to better carry 45 foot containers used in intermodal flows on the domestic market. This eliminates gaps between containers, reduces air turbulence and permits greater fuel efficiency. A standard 512m train, using the Optifret vehicles is able to carry four more 45ft containers.

This contract began in January 2016 when GB Railfreight won the North Aggregates Rail Package as part of the Tarmac Rail tender.

Initially 11 trains per week ran with an average product delivery of around 800,000 tonnes delivered to terminals at Hull Dairycoates and Hunslet. The services settled into a stable plan and collaboration at Rylstone and discharge terminals resulted in an 100% order delivery record.

Improvements delivered across the flows include tonnage increases, train lengthening, loading/discharge efficiencies and asset optimisation. This allowed Tarmac to challenge GBRf to deliver additional trains. It is likely up to five wagon sets will operate on the contract. This will mean targets met to shift 2 million tonnes of product per annum. GBRf has achieved 99.99% reliability on the contract.

The company describes this as a sector where safety performance had lagged behind on the main line railway. VR’s own involvement in safety training was generated through the mainstream operational support activities.