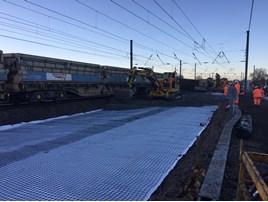 The winner in this category has benefited from the culmination of several decades of effort by the rail industry according to the National Rail Awards judges.

The achievements at Sandy South are a world first for using two Dynamic Track Stabilisation (DTS) machines in parallel, and the high hand back speed is not matched anywhere in Europe (at least). The works were delivered to time, and to budget, with a first class safety record. They saved more than £700,000 in schedule 8 compensation payments too.

The project was carried out in February 2017 when AmeySersa and Network Rail. This followed a progressive improvement in the work, rising from 50mph handbacks in 2014 to 125mph on a single S&C turnout at Belford in September last year.

The line was booked to re-open at 50mph after two core weekend, but the S&C team set out to hand it back at its full 125mph operating speed. The work was more complicated than previous 125mph handbacks in that it included one turnout and three S&C crossovers over the two core weekends.

Non-railway industries were consulted by the S&C North Alliance to understand the techniques required to improve. The Alliance spoke to industries such as car manufacturing and was subsequently able to apply right first time and quality-driven processes used to achieve its desired aims. This practices progressive assurance and is seen as a major step forward for rail.

Implementing the progressive assurance approach meant that all phases of the renewals work were of high quality and meant progress only takes place if each component part is to the agreed design and tolerance.

Having achieved the 125mph handback speed and identified the significant business benefits the whole process also allows for better understanding of possession lengths/hand back speeds. What this means, in essence, it shows what is the best business decision.

This was the single biggest Christmas engineering operation ever attempted by Network Rail. In total, some £45 million worth of work was completed.

The Crossrail work delivered immediate benefits to passengers travelling from the west into London and were crucial in contributing to the delivery of the Elizabeth Line programme.

The project involved 4,000 staff working a total of 340,000 hours across 26 different sites. Work included the commissioning of the Acton diveunder, Stockley viaduct and West Ealing sidings. The provision of a footbridge at Ealing Broadway and a new crossover to a new bay platform at Hayes and Harlington, Maidenhead remodelling, Paddington platforms 12 and 13 plus bridge works and Shenfield remodelling.

NRA judges said that the sheer “scale and variation of works which demanded multiple handbacks to time is impressive.”

The high-profile severing of the Settle & Carlisle Railway caused by a landslip at Eden Brows was a major headache for the railway, but one that ended up with the innovative idea of effectively building a bridge within an earth slope.

Extreme rainfall triggered a huge earth movement in a steep hillside above the River Eden in winter 2015/2016. The unstable earth mass was estimated at 500,000 tonnes and the river ran at the foot of the slope some 60metres below. Extreme flood levels in the river had washed away the toe of the earth slope creating the latest occurrence of instability. The length of the slope failure was 200 metres and took place between two geological fault lines.

The chosen solution to do repairs was to install 226 bored piles up to 20m in depth and then place a concrete deck slab on top of the piles upon which ballasted track would be placed.

The works were delivered on time and on budget.