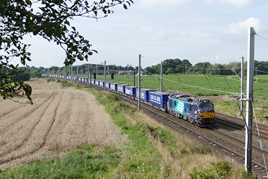 This locomotive was presented to the judges as a potential game-changer in terms of electric freight train operation, owing to the provision of a 750kW diesel engine capable of last-mile operation into terminals, as well as for train rescue. It is capable of hauling a 1,500t intermodal train over Shap at 5mph from a standing start in diesel mode.

Direct Rail Services is using a single Class 88 on its regular daily intermodal services between Daventry and Mossend. Currently, it has operated without incident, day in, day out, over the past year. It has also been used to operate a nuclear flask service nationwide, utilising electric power on the West and East Coast Main lines and diesel power for quite long stretches.

The judges felt that the Class 88 has achieved its objective in operation as a potential solution to efficient freight train operation into terminals. The ability to use metered electric power where available has also achieved considerable fuel cost savings.

Judges said this is a very impressive market-focused development pioneered within DRS.