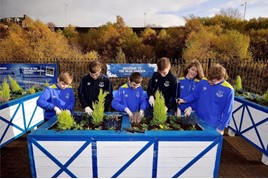 Meryseyrail adheres to a number of different areas of sustainability principles and was, therefore, a prime candidate in this category. The operator is committed to sustainability despite there being no contractual obligations or reporting requirements as part of its 25-year concession, which started in 2003.

A number of key initiatives were put forward to the judges as evidence of this commitment, but the main one is known as The Blue Garden & Inclusion Project. Everton Football Club contacted Merseyrail to explore the possibility of adopting Kirkdale station to help regenerate it, in a similar way to how other stations have been adopted on the network. It would enhance the feeling of community by engaging with young people and open up new communication channels with what is often seen as a hard-to-reach group.

Pupils of the Everton Free School installed a ‘blue garden’ at the station as part of Everton’s pledge to make the area around Goodison Park ‘more blue’. This included three planters the pupils had designed and made. The football club donated three stadium seats so that passengers can sit in the garden area, and the school maintains both the planters and seats. An information panel was installed to explain the significance of the garden and the project.

There are already a number of other plans under way to involve pupils from the school in community projects with Merseyrail.

The judges said: “Merseyrail is an excellent example of how a train operator can become an integral part of the community it serves and the mutual benefits that can be achieved through commitment to sustainable business practices.”