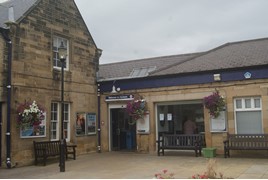 Hexham station in Northumberland is located on the Tyne Valley Line, running from Newcastle upon Tyne to Carlisle. Last year, the station served around 344,000 passengers, an increase of 12,000 on the previous year.

The station dates from 1835, making it one of the oldest purpose-built stations in the world. It now has an hourly Northern service on weekdays to Carlisle and two trains per hour to Newcastle. Hexham’s floral displays have won several awards from the Britain in Bloom scheme.

The judges said that Hexham has turned itself into a railhead of the Hadrian Wall area. The station feels both part of the town and part of regional tourism. It is smartly presented and well integrated into the community. There is a tourism office as well as taxis, buses and bicycle hire. Staff greet each arriving train and help passengers on their way.

A ‘Serious Game’ virtuality reality simulation is being developed to support disabled people to better access travel on Northern’s services.