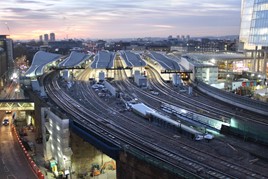 This has given the UK a new ‘Cathedral’ station in place of a mundane and congested legacy, said the NRA judges. Serving around 55 million passengers a year, the vast new concourse and generous escalators allow for faster interchanges, while the full-length canopies on 15 platforms are both customer-friendly and expedite departures. The extra street accesses are already well used and staffed by proactive staff who volunteer assistance.

London Bridge station was originally opened in 1836, making it the oldest of the London railway termini that are still in use. It was comprehensively redeveloped between 2009 and 2017 as part of the Thameslink Programme, which included rebuilding all of the platforms, the addition of two new street-level entrances and changes to the passenger concourses and retail facilities.

It is the fourth-busiest station in the UK.