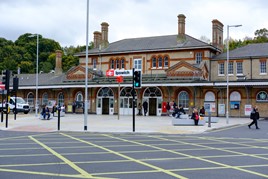 This station is a winner because it has been transformed in recent years into what judges describe as an impressive county railhead. Ipswich has been well modernised and includes an excellent transport interchange, together with generous bicycle and car parking facilities. The complex rail interchanges between five routes are handled well by the station’s proactive staff and good information.

Ipswich station was opened on its current site in 1860, following relocation from its 1846 site and original name - Ipswich Stoke Hill. The station is just to the north of Stoke Tunnel, which was constructed as part of the Ipswich to Ely Line.

The station also has a number of goods facilities with private sidings and extensive railways in the docks.

Entries for this year's 'Railway Oscars' are now open