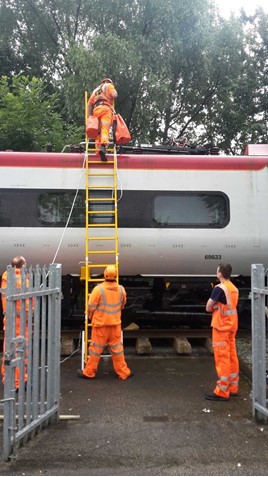 Safely accessing the roof of trains after the overhead wires have become tangled is a long-standing problem for the railway, affecting all parts of the electrified network. Overhead lines can become tangled in the pantograph equipment, meaning that the wires must be isolated and someone then has to climb on the roof to untangle them before the train can be rescued.

Past solutions to this problem have been inconsistently applied across the country, and the risk to staff of falling off the train was too significant to ignore.

Siemens’ answer was to develop a new emergency roof access system to enable staff to access the roof safely and efficiently. The system can be carried by two people and includes a stable and secure ladder-type assembly featuring three-point anchorage.

Improvements have already been made to make the system smaller and lighter to carry and each set of equipment only costs about £800. It has not yet been needed for many incidents, but it proved itself in September 2017. A London Midland Class 350 had stopped on the main line at Birmingham International following an entanglement with the overhead line equipment. Network Rail allowed Siemens to demonstrate the new system on its behalf; staff safely accessed the roof, untangled the wire, vacated the roof and rescued the train, all within 45 minutes.

Without the new system, the train could have remained stationary until a rescue plan had been formulated, resulting in financial loss for Network Rail and the train operator, as well as significant disruption to passengers.

The judges said: “This is an excellent initiative which undoubtedly solves a problem and will reduce recovery time after dewirements and similar incidents.”