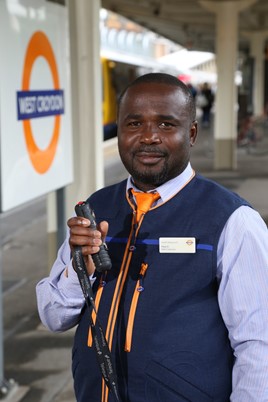 Peter Kodua has worked for Arriva for the past 15 years in various roles. His current line manager says that he brings unprecedented dedication to his job and is always prepared to go the extra mile for his customers, the local community and his colleagues.

Peter says that he is defined by three things:

Peter has regularly gone above and beyond the brief over the years. He is always the first to put on his high-vis vest and get out among the passengers during a disruption. His polite and calm demeanour, combined with his incredible rail knowledge, means that even the most aggressive customers are disarmed.

On Boxing Day last year, he received a call to say that there were trespassers on New Cross Gate station, so he went down to investigate. Instead of sending them away, he helped them to top up their payment cards and showed them how to get to their destination, all of which took him two and a half hours.

One day on his way to work, an unconscious passenger was discovered on board his train; out came the high-vis vest. He looked after the passenger until the train reached the next station, where everything was in place to look after them because he had been in touch with the control rooms and British Transport Police en route.

The judges felt that Peter embodied everything they look for in an OPC winner - dignity and pride in his work.