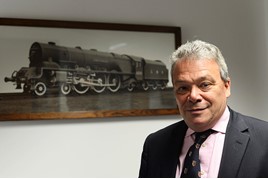 Ian Prosser CBE is an unassuming, calm and low-profile character. Appointed as Director of Rail Safety at the Office of Rail and Road (ORR) in May 2008, he also carries the historic title of Chief Inspector of Railways for Her Majesty’s Railway Inspectorate - only the 26th holder of this office since the Railway Inspectorate was founded at the instigation of George Stephenson in 1840.

It is Prosser’s superb contribution to rail safety that won him this very special judges’ award. He has been a constant, unyielding and relentless presence behind four Network Rail chief executives (Iain Coucher, Sir David Higgins, Mark Carne and now Andrew Haines).

During Prosser’s time at ORR so far, most safety indicators are moving consistently in the right direction and, as it stands, there have been no fatalities on a passenger train since February 2007. This statistic compares incredibly well with the rest of Europe where passenger deaths are still far too common.

Judges said that Ian’s relentless pursuit of rail safety, on behalf of passengers, public and workforce, has led the way in giving the UK the safest railway in Europe.

His approach is polite but determined and collegiate, yet thoughtful. He is unafraid to prosecute under relevant legislation where required and he secures convictions.

Over the decade of his period in office thus far, a significant change and improvement in safety culture have been achieved which, while difficult to bring about, has been a welcome and important improvement on the railway.