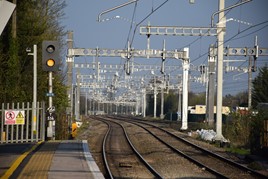 Covering all of the Network Rail works west of Paddington, this project cost £1.4 billion, which was an increase on its original budget of £1.1bn, reflecting the scope changes that were necessary to accommodate the extension of Crossrail services to Reading and the Intercity Express Programme. Despite the changes, all stages of the project were delivered on time or ahead of schedule.

Although the project was delivered under a traditional ‘hub and spoke’ contracting model, delivery partner Bechtel recognised early on that a different mindset would be needed, and so the separate target price contracts were amended to a collaborative approach that allowed for the sharing of worksites, possessions and expertise.

The programme entailed a number of large elements, including electrification to allow the introduction of three new sets of rolling stock within a year, adding 4,000 seats into Paddington each morning, and resignalling at Paddington over Christmas 2017.

Safety on the project was the best within Network Rail’s Infrastructure Projects division, achieved through the adoption of integrated safety teams and a ‘no blame’ culture to encourage reporting of close calls.

Collaboration with Great Western Railway was also a key element of the project and there has already been a positive reaction from passengers to the new Maidenhead services.

The judges said that they believe this project will change the way Network Rail approaches such major projects in future, in particular by ensuring operational design is fully taken into account at the development phase, by retaining expertise across the whole project, and ensuring that learning is transferred (many of the Crossrail West team are now working on the Paddington to Reading project).

The judges felt that in light of this and the fact that it was delivered to time, on budget, with a good safety record, and is already benefiting passengers, it was a clear winner.