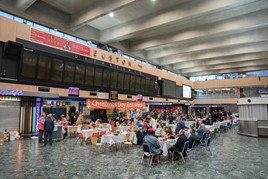 Back in Christmas 2017, a group of four individuals working for Network Rail decided to turn an empty Euston station into a Christmas Day meal venue for 200 homeless and deprived people in the area.

But this couldn’t just be any old dinner, it had to have all the joy and sparkle of a proper Christmas feast. S&C South Alliance Head of Transformation Steve Naybour (also the winner of an Outstanding Personal Contribution award this year) took on responsibility to partner with homeless charity St Mungo’s and outreach organisation Streets Kitchen to ensure every guest had a Christmas Day to remember, including a new sleeping bag and warm clothes to take away with them.

The concept was strong enough to overcome a host of possible objections, including the potential security risks of hosting such an event in a large station, greatly helped by the British Transport Police.

No taxpayer funds went into the initiative - everything was donated by around 40 companies to create this very special day.

This generated a huge amount of positive feeling towards the railway - so much so that antisocial behaviour and crime have halved at the station. A long-term benefit has also been created for the local community, with Euston station building relationships with the Big Issue and the Camden Foodbank.

The success of this first event has inspired at least five other Network Rail stations to plan similar events for Christmas 2018.

The judges said this initiative was a brilliant innovation that was carefully executed and which has lasting benefits.