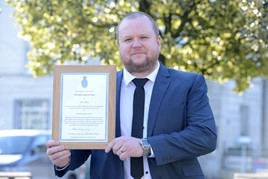 August 8 2017: it was a busy morning at Plymouth station and parents were out with their children, enjoying the summer sunshine.

John Phare was working in the ticket office when he witnessed an incident for which no amount of training could have prepared him. He saw a man repeatedly stabbing another person. The terror attack at London Bridge station had taken place only a few months earlier, and John feared the worst.

He left the safety of his ticket office to try to stop the assault.

John said: “I could see that a man was being stabbed. I just didn’t think, and I rugby tackled the assailant to the ground.”

He tackled him with an unorthodox rugby tackle and held him down while colleagues assisted.

“At one stage he pointed the knife at me,” said John “But I just carried on. I managed to get hold of the knife and throw it to one side.”

John was covered in the blood of the victim - Wayne Fenton - who had received 40 knife injuries and, sadly, died in hospital an hour later. John restrained the attacker - Jamie Skinner - for ten minutes until the British Transport Police arrived. Skinner was later convicted of murder and received a life sentence.

John could have stayed in the safety of his booking office. Instead, he chose to put himself in harm’s way, despite being warned by the taxi drivers outside not to go onto the platform.

He told the NRA judges that he took a calculated risk, that he would only get stabbed somewhere non-fatal, such as in the arm or leg. He said there was no way he could have stayed in his office when there were women and children on the platform.

“They are my responsibility,” he said. For me not to do anything and for that to lead to someone else being killed or injured would have been like a life sentence.”

The next morning, John was the first member of staff in the booking office, ready to start his shift as normal.