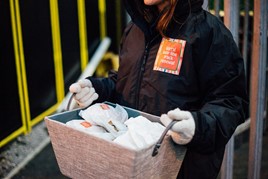 The Wirral loop line which connects Wirral and Liverpool is one of only three ways of crossing the River Mersey (the others being road tunnels or ferries). On January 2 2017, the line was closed for essential maintenance.

The planned work would offer no visible improvements as far as passengers were concerned, and could even have forced them to switch to other modes of transport, such as buses, ferries or cars. The latter option had the potential to cause traffic chaos if passengers chose to drive rather than use rail replacement options. The local media was predicting mayhem.

Merseyrail’s approach was a collaborative strategy with Merseytravel and Network Rail to engage not only Merseyrail passengers but also stakeholders and residents across the Liverpool City Region. It was vital that the local economy should not be affected by the six-month project.

A strategic industry communications group was created to disseminate consistent information across all parties, using an eye-catching retro design and coordinated social media coverage to reach the audience. Using the approach taken during the Olympics, travel demand forecasting was used to provide information and advice to passengers to reduce pressure on the network in key locations.

The teams even provided passengers with bacon rolls in the cold weather and umbrellas when it rained!

The result of this coordinated messaging was that 80% of Merseytravel customers agreed the information provided had enabled them to make informed journey choices, there was no ‘travel chaos’, as predicted by the local media, and only 0.0001% of passengers complained.

Judges said: “The pre-planning and early advice to passengers of the proposed closure through numerous media campaigns ensured passengers were well informed before the closure. There was an amazing level of passenger focus, a continuous stream of feedback during the bus replacement operation, superb partnership with Arriva Buses (including the purchase of new buses and the fitting out of ‘bike bus’, great eye-grabbing (Liverpool-themed) information and a very high percentage of people returning to the service when it came back into use.

“This project demonstrated excellence in planning, execution and delivery; it has set the benchmark for all future major infrastructure works.”