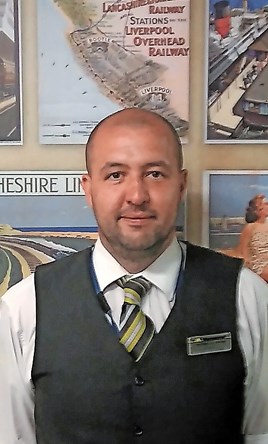 Stuart Barrett, Assistant Station Manager at Southport Station saved a man’s life. Stuart was in the ticket office on August 13, 2016 at Southport Station when a call came over the radio asking for a first aider to help a man who had collapsed on a train.
Stuart ran to assist. He found the man was unconscious on the floor and Station Assistant Paul on the phone to Emergency Services.  Stuart checked the man for a response; nothing. He checked for breathing again; no breathing.
Putting the man on his back, he asked Paul to clear the train of passengers. He then attached the defibrillator and, when vital signs were detected, administered a shock and started CPR. Still no vital signs.
The defibrillator advised a second shock. Stuart did this and continued CPR.
The man took a deep breath, just as the paramedics arrived. When the paramedics took over, Stuart didn’t go back to his work. Instead, he comforted the man’s wife until the man was taken to hospital.
Southport Station Assistant Paul scantly said, “Having known Stuart for many years this comes as no surprise to me that he has saved someones life. He is a very capable fellow and is very steady under pressure. I also know that he will feel humbled if he receives this reward as he is a guy who just gets on with the job.”