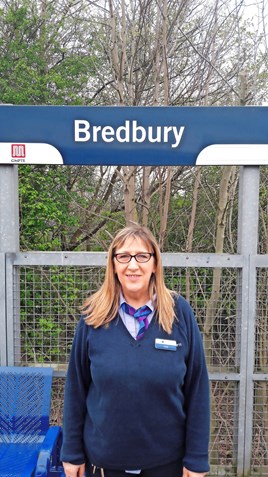 Northern’s Anne Mason went above and beyond in her role as Retail Sales Assistant at Bredbury Station to ensure the safety of a teenage customer on 16 March 2017.
The arrival of the 14-year-old at 0630, carrying a bag and requesting a one-way ticket immediately rang alarm bells with Anne. She decided to engage the teenager in conversation in order to discover his intentions but without scaring him away.
He soon revealed his plans: that he was running away from home and that he was going to meet someone that he’d been communicating with on an internet chatroom. Anne managed to persuade the boy that he had two choices: either Anne could call the police or she could call his parents. The boy accepted the latter option and was soon collected by his parents.
Luckily, the boy had been in contact with another teenager rather than something more sinister. However, the boy’s father later said, “Had it not been for Anne’s swift actions who knows what might have happened, especially if my son had boarded that train and reached his destination.
“We are often quick to contact an organisation to express our disappointment if a service or product is not to our satisfaction. However, equally we can often be just as guilty of not highlighting exemplary service when it happens.”

Boxhill & Westhumble station, on the Horsham-Leatherhead line, is to receive £1 million worth of repairs to its canopy roof and footbridge.