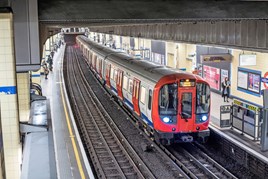 Congratulations to London Underground for winning the most prestigious National Rail Award.

More than 1.3 billion passengers were carried on the system at a time when the highest levels of customer satisfaction were recorded. Capacity on the system is at record levels due to the introduction of new trains and signalling systems.

Judges were particularly impressed by a number of successful network-wide initiatives and strategies adopted by the LU including the systematic management of current performance that was conducted line by line, empowering local station staff to meet local customer needs and the determination of senior management to successfully implement “radical growth strategies” including Night Tube and network-wide efficiency measures including all-automated ticketing despite a period of industrial action and “orchestrated resistance to change”.

LU says that more than of its 270 stations have been improved through the introduction of tactile strips, better CCTV and help points, electronic information displays in ticket halls and on platforms, and improved seating and lighting.

LU has a challenge to meet the continuing passenger demand in the capital. Schemes such as Night Tube have been launched in the past year. More than 50,000 passenger journeys were completed on the first night on the Central and Victoria lines. They were followed by the Jubilee line in October and Northern line late last year.

Night Tube services have met a clear demand made by London, and its use has increased at double the rate of daytime trips. Its introduction has enabled LU to open up the capital’s night-time economy, supporting almost 2,000 permanent jobs and boosting the economy by £360 million. LU has committed to key improvements for passengers including further reliability enhancements and capacity increases. It says all Tube stations will be controlled and staffed while services are operating and that staff are now more visible and available than previously in order to help passengers buy the right ticket, plan their journeys and to keep them safe and secure.

It is introducing more personalised information for passengers while online services are being optimised for passengers ‘on the move’. LU is expanding its WiFi coverage to all Tube stations and the introduction of contactless bank card payments is continuing which means passengers need no longer queue to convert their currency into LU’s Oyster and tickets.

A previous winner of this category, the National Rail Awards judges said that at Chiltern Railways “the spirit of continuous improvement still thrives on Chiltern, despite recent senior management changes.”

The operator has delivered high quality customer service, excellent operational performance and a competitive determination to successfully expand the market in the region it serves.

In the past year, CR has worked closely with Network Rall, continually encouraged feedback from staff and acted upon it, refocussed the management team on day-to-day delivery following the completion of major projects, the use of timetable modelling to improve punctuality, the introduction of a new fares strategy designed to grow the operator’s West Midlands market and an innovative use of multilingual information to grow the Bicester Village market which has some niche international users.

Judges felt that Merseyrail’s success in being highly-valued and recognised by the local community on Merseyside was well worth recognising with a Highly Commended award this year.

In the past year the operator has focussed on right time delivery in terms of performance management that clearly demonstrates a clear spirit of continuous improvement. While Merseyrail may regularly top the league for Public Performance Measurement it is not yet the best in terms of right time performance.

The company has a strong relationship with Merseytravel which is demonstrated through an order for new rolling stock, station control and modernisation of ticketing.