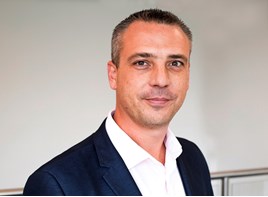 James has worked in rail industry for more than 20 years but he remains just as passionate as he was when he first started and has never considered moving into another industry.

Upset by hearing about accidents and fatalities on the railway, James decided that he wanted to do something about it. In 2014, he created SAFE START – an exhibition that was initially for Carillion to meet all of their suppliers to allow the suppliers to showcase their latest innovations and, most importantly, their safety methods.

James told the NRA judges that he felt it was important for the supply chain to meet the ‘boots and ballast’ and for both parties to understand the issues of the other. Since the first event at the Derby Assembly Rooms, this has now turned into an event attended by more than 750 delegates and 70 exhibitors from across the East Midlands.

This year, James added a new feature to the event called SAFE STOP, which encourages people to stop and intervene if they see unsafe work practices and to consider the wider safety consequences of their decisions. Two suicides were prevented this year as a direct result of this scheme. James’ next goal is to turn this into a national programme.

When the judges asked James why he took this upon himself, rather than leaving it to colleagues responsible for health and safety, his answer summed up perfectly what makes for a winner in this category – “if you can make a difference, then you should”.

James has also set up a Working Dads network, saying that everyone needs a shoulder to lean on at some point in their lives. While there was already an established group for working mums, there was nothing for dads, so James set it up.

If that wasn’t enough, James has also been the lead in organising a number of events with the Derbyshire Wildlife Trust and has undertaken £200,000 worth of projects over the past four years. He has involved the supply chain in this to ensure that the environmental benefits extend beyond his own company.

John Murphy told the NRA judges that he had the “privilege” of introducing GWR’s new EMU fleet. He said that, as the biggest change in the industry since steam was replaced by diesel, who wouldn’t want to be a part of it.

There were some serious delays with this project, but John’s can-do attitude and mantra of “every day brings new friends and new opportunities” meant that no problem was going to stop this project from being delivered. The trains were operating 39 days after the first set was delivered to GWR, despite the fact that John’s wife gave birth to their first child during the height of the project (he told judges how much he valued her support). The first train was delivered as scheduled on May 22, the day his daughter also learned to clap!

John told the NRA judges that he loves “bio-mechanical machinery” (more commonly known as people) and how the get the best out of them.