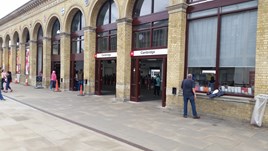 Cambridge station has been transformed through major investment.

Opened in 1845, the station now has eight platforms following the construction of a new island platform in 2011.

Further improvements were carried out by Greater Anglia with a bigger concourse, more ticket gates and machines and a bigger ticket office. These opened at the beginning of 2017.

National Rail Awards judges say it now possesses the ‘wow’ factor, something that hits passengers initially via the extensive environmental work that has been carried out outside the main entrance. This continues into what they call a “beautifully extended ticket hall.”

There are four bay platforms (two at the southern end and two at the northern end), while at 514yards, the station is home to the third longest platform face in the UK (after Colchester and Gloucester). It is split into two individual platforms a crossover.

Out on the platforms there are numerous smart retail outlets while helpful staff can be found going out of their way to help passengers find their trains.

A new Dutch-style multi-storey cycle hub adds the finishing touches to a station that judges describe as an outstanding gateway for the city.

Today the station is served not just by Greater Anglia, but also by Govia Thameslink Railway as well as CrossCountry. There are two routes to London, with GA and GTR both running trains to the capital. This helps the growth in passengers from 8.823 million in 2011/2012 to 10.954m in 2015/2016 according to Office of Rail and Road statistics.

This station has powered its way up the score card according to the National Rail Awards judges.

Reasons for this remarkable improvement include an innovative ticket vending area boosted by plenty of helpful staff.

Large numbers of passengers bound for the National Exhibition Centre, Birmingham Airport and a park ‘n’ ride facility use the station with “effortless ease”. Judges said the station also offers impressive customer service, and that it must be one of the most underrated intercity stations in the country.

A mixture of long-distance, inter-regional and local services serve the station, and while VT may manage the station, Arriva Trains Wales, CrossCountry and London Midland all contribute to increasing passenger numbers which totalled 5.773 million in 2015/2016, up from 5.129m in 2014/2015.

This is the first time that Derby has reached the finals of this category.

The station has been modernised in recent times, with very pro-active staff visibly proud of their work. They act to keep the station facilities in immaculate condition and also volunteer customer service.

Special features at the station include dual entrances on each side the railway, as well as the ease of interchange to taxis, buses and car parks.

There are six platforms at the station, which will be increased to seven next year as part of a remodelling of the railway. Retail facilities are available at the concourse, as well as on one of the island platforms.

CrossCountry serves Derby as well as EMT, with destinations including the North East, Scotland, the South West and Wales. EMT operates all local trains and those to Sheffield, Leeds and London St Pancras.