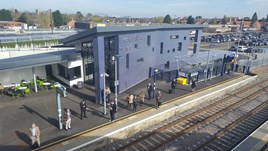 The station, known as Bicester Town closed in February 2014 as the railway was improved as part of the upgrade of the route from Bicester to Oxford, which culminated in the start of through trains from London to Oxford last December.

It features two platforms, two car parks (which between them provide 190 standard spaces and 18 spaces for passengers with reduced mobility). There are a further 60 spaces for bicycles and 18 for motorbikes.

There is also a footbridge linking the two platforms, and this features accessible lifts for passengers of reduced mobility, and also for those weighed down by their shopping.

Judges noted that the station’s main entrance offers an innovative ticket hall for local users, while there is a second station entrance that offers shoppers a direct route to the shopping outlet centre and this features its own lounge and staff.

Judges also noted what they described as “a thoughtful customer service touch,” by the provision of announcements in Japanese and Mandarin, to cater for the large number of visitors from these countries using the station.

The station is staffed, and customer help points are provided while there is also a lost property service available. CCTV covers the station too.

Public WiFi is available while there are refreshment facilities too. There are toilets at the station including accessible facilities. Waiting rooms are available, while there is also step free access.

This station may effectively be brand new, but it sets incredibly high standards and is certainly one to watch in the future.

A previous winner of this category, National Rail Awards judges called Templecombe: “a jewel amongst the rural Small Stations.”

The judges once again congratulated the Friends of Templecombe station who look after the station. Their surprise is in the shape of a new garden that was created by local schoolchildren.

South West Trains operates the station, which is situated on the Exeter to London Waterloo route, and the operator has continued to support the Friends in their maintaining of what the judges calls some of the best station gardens in the entire country. They have also upgraded the station facilities and provided a photographic history of the station’s past.

At the end of the Tarka Line, Barnstaple station is something the National Rail Awards judges describe as a “delightful surprise for travellers at the end of a long branch line.”

Passenger numbers have increased in recent years, and a single platform is all that is used by GWR trains these days, but that has not stopped its restoration in a Southern Railway heritage style. It is closely linked to the local community. There is a well-run ticket and information offices, as well as a cycle hire/repair hub, a tourist centre, shop and lively café and garden.

Barnstaple station, which is mainly served by trains from Exeter and Exmouth, has, according to the NRA judges, “truly turned itself into a gateway for North Devon.”