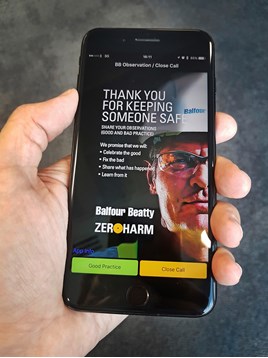 In a first for the National Rail Awards, three separate entries were made for a very similar system, developed completely independently of one another. As such, the judges did not feel it would be right to ask them to compete against each other and asked them if they would consider joining forces.

All three parties gladly accepted and send a company director to represent them at their interview. They were all pleased with the suggestion to co-operate because the process itself had already led each of them to identify improvements in their own systems.

All three companies had developed an app described as a tool to serve an essential cultural change – to increase the number of close call reports which could be submitted much more easily than previously and can be followed up in real time if important.

The companies recognised that any system which asks employees for too much information when reporting a close call will deter individuals from using it, so they kept the requirements to the ‘need to know’ rather than the ‘nice to know’.

In each app, any report submitted receives an automatic acknowledgement and will receive a follow-up response, the timing of which will reflect the importance and urgency of the issue raised.

Following introduction of the apps, there is evidence of dramatic increases in the number of reports being made.

Judges said: “The industry often faces accusations of being well behind in using modern technology, whether for safety applications or any of the other myriad tasks involved in running this complex industry; here we have three companies which have forged ahead in developing an obviously user-friendly system which is clearly already reaping rewards.”

The platform-train interface is still one of the main areas of risk on the railway. Over the years, several initiatives have been introduced to mitigate the risk to passengers, such as the ‘Harrington humps’. This entry from BAM Nuttall was described to judges as a ‘Meccano kit’ which raises platform heights where necessary and can be projected forward where clearance allows on curved platforms, without major, expensive and disruptive work.

East Croydon is one of the few stations on the network that offers a 24-hour service but it was possible to introduce this system on Platforms 1 and 2 during limited possessions. The system is much quieter to introduce that the type of construction work that would otherwise be required to bridge major gaps in stepping distances. Essentially, spars are used which are available in varying heights to lift the platform as necessary. The prepared surface is then laid, which comes ready with the white platform edging, tactile strips and yellow lines, blue anti-suicide lights and heating where required during icy weather.

Judges saw this as a highly versatile, relatively cheap way of addressing some of the major risks at the platform-train interface, bringing other advantages such as a demonstrable reduction in suicides.